Today marks the day of the final showdown between the defenders of Hogwarts and the forces of late Lord Voldemort. In the fictional world of Magical Britain, nineteen years ago today on 2 May 1998, the Chosen One sacrificed himself for the Wizarding World, and the Dark Lord was eventually killed by his own rebounding Killing Curse.

Folks on Twitter and Facebook are marking the day with the hashtag #BattleOfHogwarts19. In this article, we recall some of the most memorable moments from the battle which decided the fate of the Wizarding World.

“A man who trusted you!”

Admit it, we all get goosebumps when Harry Potter finally confronts Severus Snape about the murder of Albus Dumbledore.

Tell them how you looked him in the eyes, a man who trusted you, and killed him.

Harry, and the whole of Order of Phoenix, successfully breached Snape’s exhaustive security measures and entered the Hogwarts castle via a secret passage from the Hog’s Head bar in the nearby village.

And then McGonagall put herself between Harry and Snape, forcing him to flee the castle. Snape flew out a window, leaving his cronies Amycus and Alecto Carrow Stunned in the Great Hall.

Watch Maggie Smith and Daniel Radcliffe being badass, and Alan Rickman in his element in video of this scene below:

This scene plays out slightly differently in the books. Snape duels Professors Flitwick, Slughorn and McGonagall all at once before fleeing through a window, leaving a Snape-shaped hole in it. McGonagall boos at him, calling out “Coward!” as he flees.

“I’ve always wanted to use that spell.” 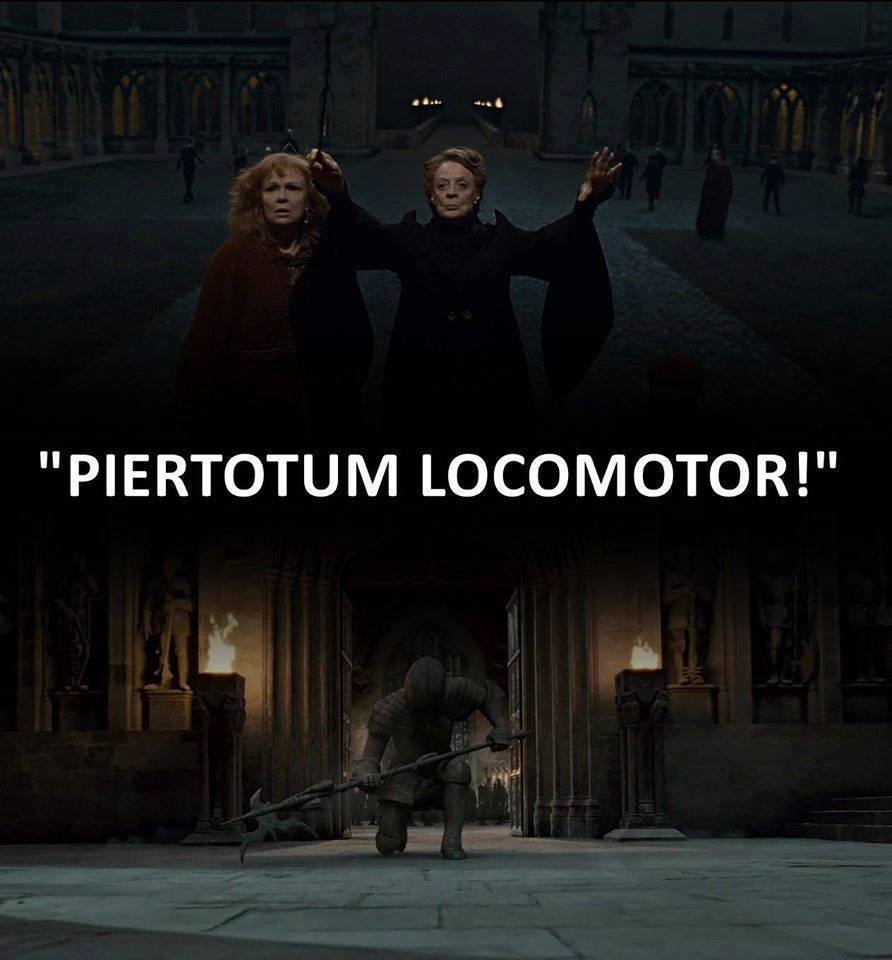 Such nostalgia! Every time we re-watch this scene, the pride in Professor McGonagall’s eyes has us crying our hearts out. Mrs. Weasley thinks McGonagall has gone mad, though.

“You have your mother’s eyes” 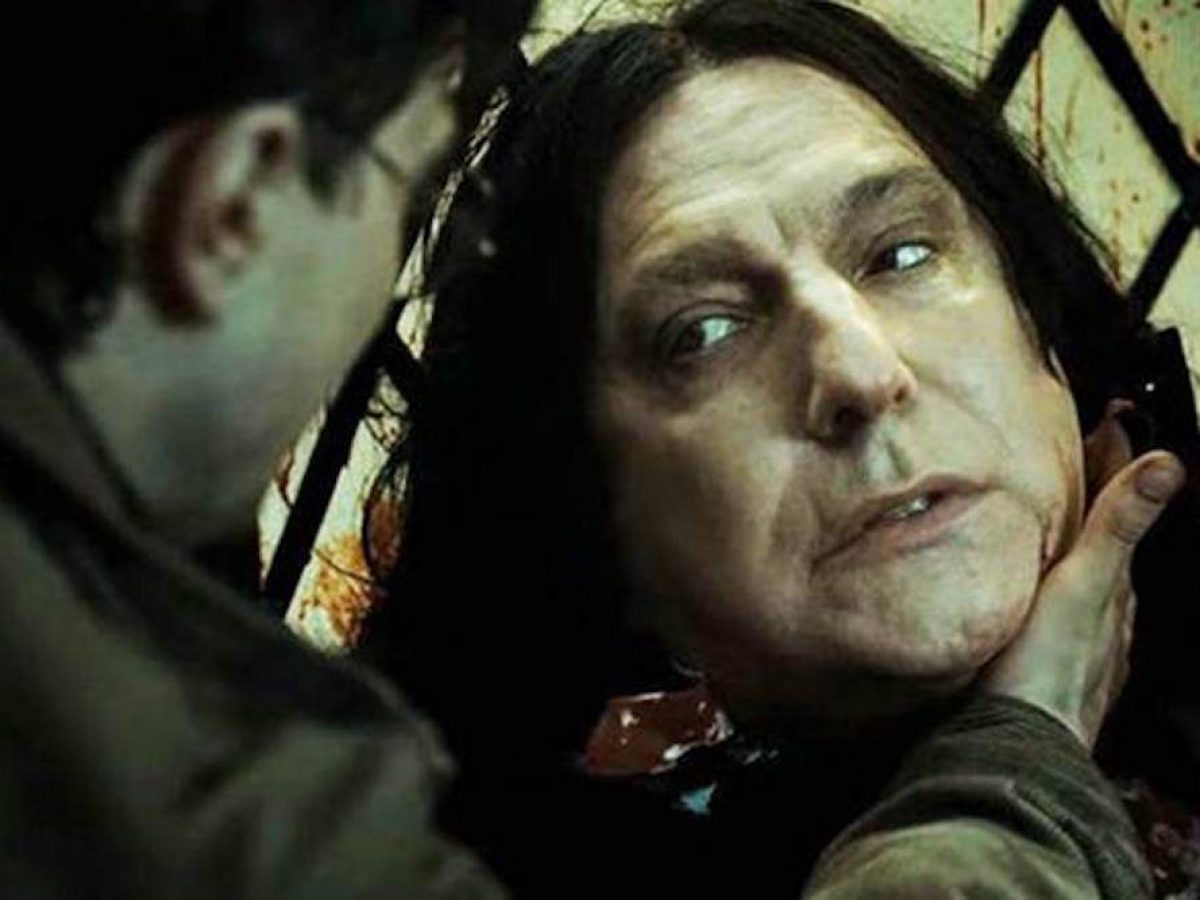 Fast-forwarding to Severus Snape’s death in the Shrieking Shack (or the boathouse, if you prefer the movies) where we witness what we could never have imagined even in our wildest dreams. Severus Snape crying with actual tears and talking to Harry with something akin to tenderness in his voice.

Snape leaves Harry his memories, and asks him to “look at him” as Hermione and Ron silently look on. He was bitten by Nagini on the Dark Lord’s orders who believed Snape to be the master of Elder Wand.

“After all this time?” 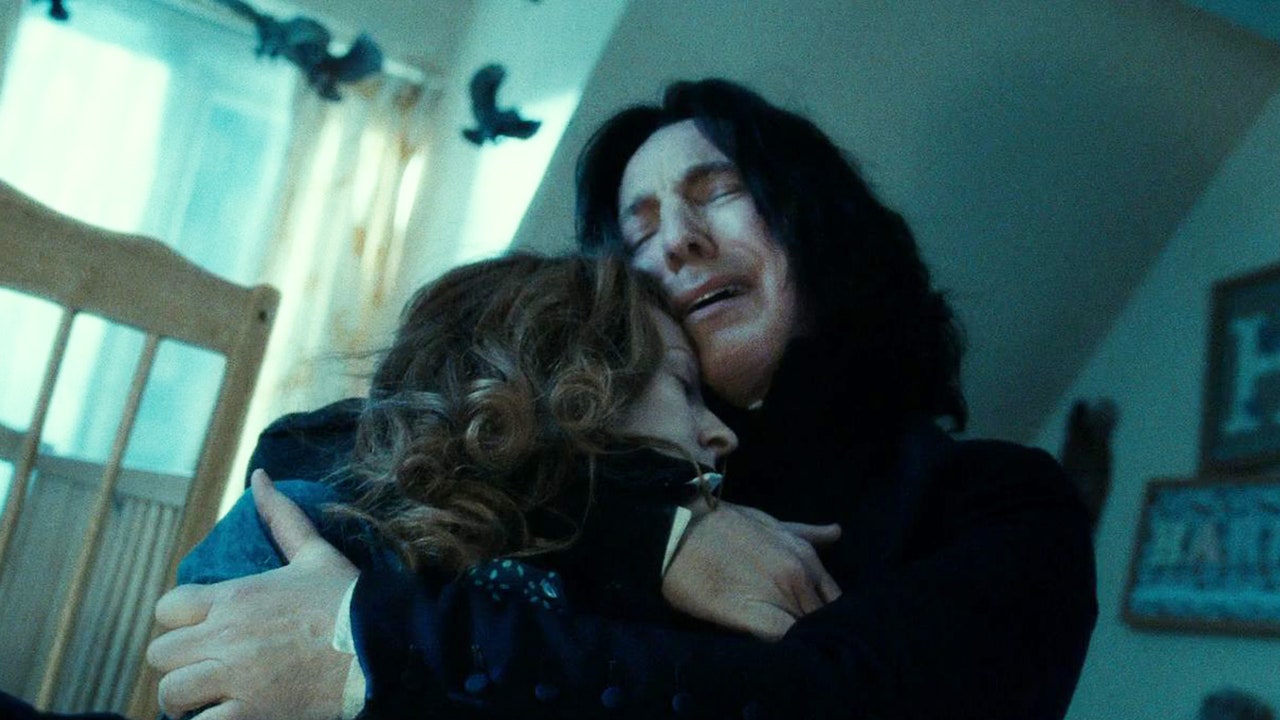 Harry takes Snape’s memories to the Pensieve in the Headmaster’s office. We learn that Dumbledore had been raising Harry as a pig for slaughter. Harry has a piece of Voldemort’s soul and must die for Voldemort to be killed.

Snape is furious when he learns this, and reminds Dumbledore they were supposed to have been protecting Lily Evans’ son, not preparing him for death! He conjures up a doe Patronus from his wand, the same as Lily’s. Same Patronuses are a mark of true love in the Wizarding World.

“Until the very end” 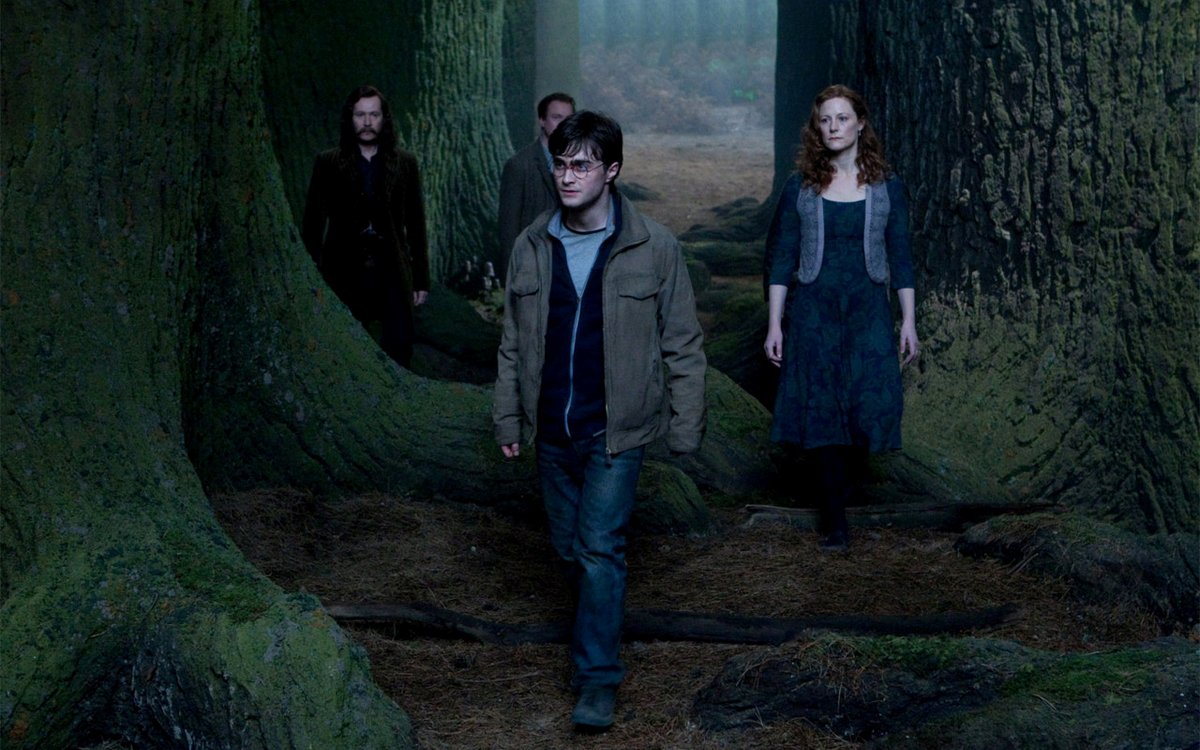 Harry goes into the Forbidden Forest where Voldemort is waiting for him and greets death as an old friend. Like Ignotus Peverell. He finally works out how to open the snitch Dumbledore left him in his will, and uses the Resurrection Stone inside to call images of his parents, Sirius, and Lupin from death.

Harry asks them to stay close to him as he walks to meet his death. He finds Voldemort and the Death Eaters in Aragog’s clearing and Voldemort uses a Killing Curse on him. 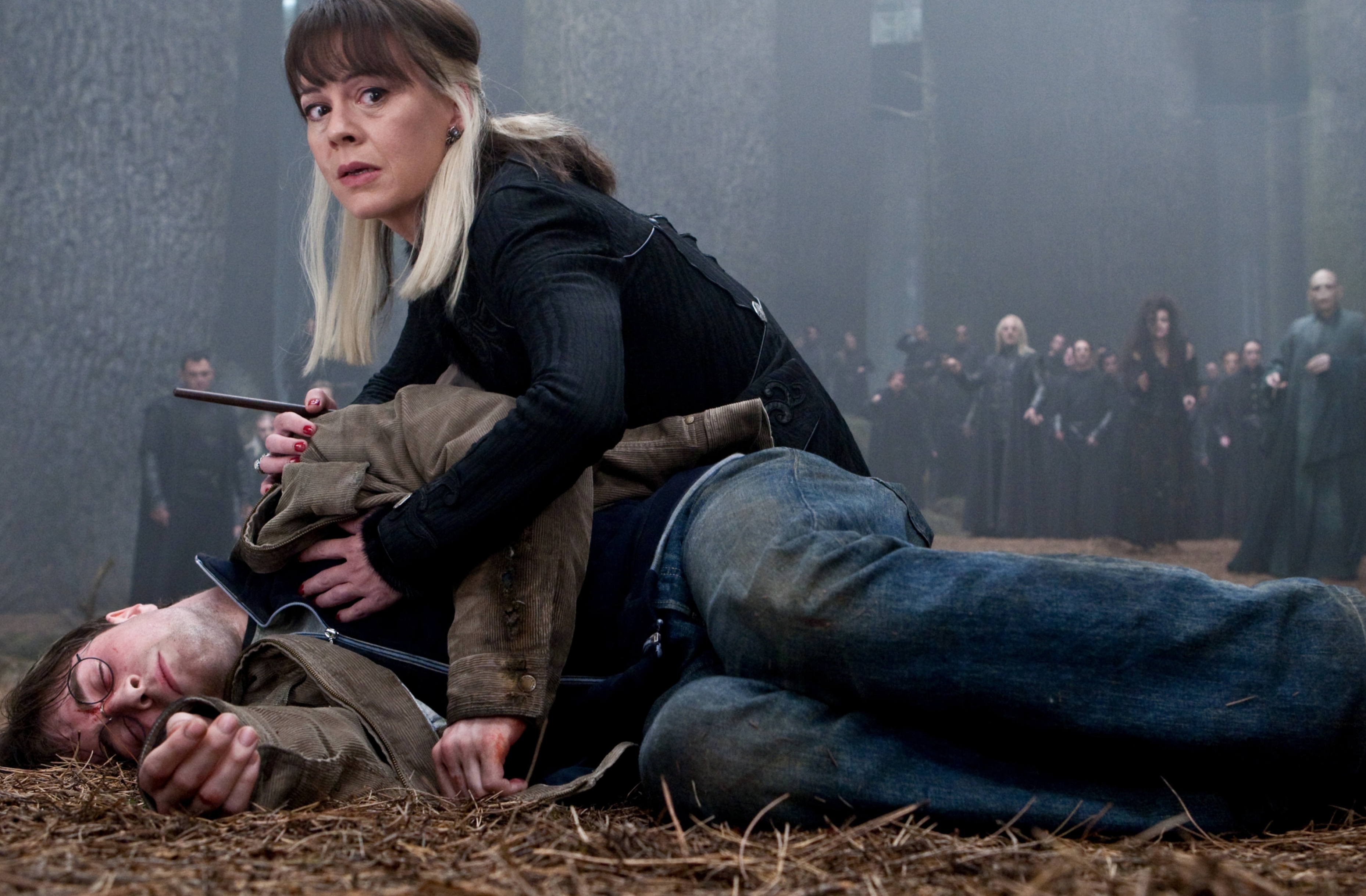 Voldemort sends Narcissa Malfoy to confirm whether Harry is really dead this time. Narcissa however no longer cares about Voldemort’s victory by now. All she wants is to return to the castle and find her son. Her love for her son has overpowered her fear of the Dark Lord.

So she lies. After confirming Draco’s well-being from Harry in a whisper, who survived the Killing Curse yet again, she announces that Harry is dead. Voldemort, who had recovered from aftereffects of his curse moments ago, is not able to detect the lie in his moment of weakness. 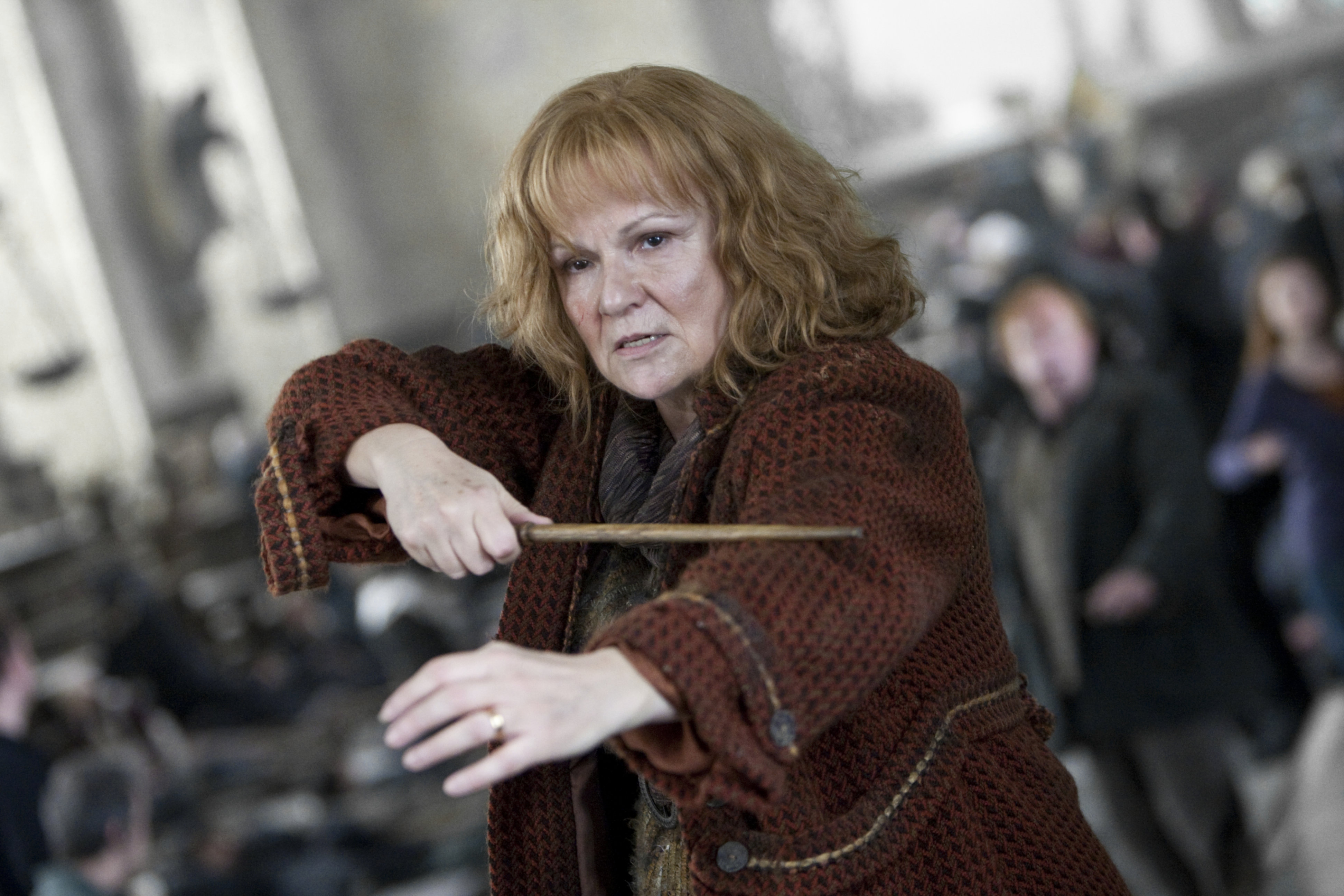 Voldemort returns to the castle at head of a victorious army. That is, until Harry reveals that he is alive. Narcissa has fled with her husband and son by then. Many other Death Eaters desert Voldemort on seeing Harry alive.

But not Bellatrix. She fights as fiercely as Voldemort himself. As one of Bellatrix’s Killing Curses misses Ginny Weasley by inches, the motherly Mrs. Weasley challenges Bellatrix and duels her to death.

These are some of the most iconic moments from the Battle. As we conclude the article, we would like to ask everyone to raise their wands and observe a minute of silence in memory of the fallen warriors of the Battle of Hogwarts; Severus Snape, Fred Weasley, Remus Lupin, Nymphadora Tonks, Colin Creevy, Lavender Brown, and all others who laid their lives defending the world from the darkest wizard of all times.